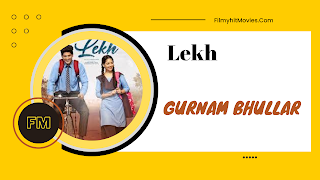 Lekh Punjabi movie is releasing on 1st April 2022. The trailer of this film has got a lot of love, because the film is very tremendous. The running time of the film is 2 hours and 2 minutes. The film will release in Punjabi language only. The story of the film is about the love of a boy and a girl during school, whose names are Rajveer and Raunak. How they both fall in love with each other, you will be shown in the film. It's a very sweet story. Jagdeep Sidhu has written this story. The director of the film is Manveer Brar. Gurbir Singh Sidhu is the producer of the film, Manmor Singh Sidhu has played with him. The film has been awarded with music by B Praak and Jani. Friends, you must have known B Parak, how powerful his voice is and when he sings a romantic song, he makes a lot of noise.

Now let's talk about the casting of the film. Gurnam Bhullar is the main hero in the film. Tanya has played with him. Both are great artists. He has given many great films and songs to the Punjabi film industry. And Nirmal Rishi is playing the role of his mother. The entire life of Nirmal Rishi is dedicated to the Punjabi film industry. Very nice love story. Do watch the film after its release, you will love it. How did you like this information, do write to us. Stay with us for information about other films.