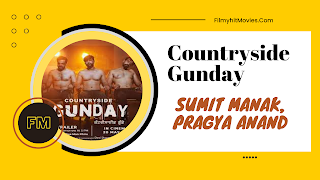 Countryside Gunday This movie is releasing on 20th May 2022. The film will be released only in Punjabi. Countryside Gunday is a Drama Punjabi movie. A lot of new faces are coming in the Punjabi film industry, you will see something similar in this film. The director of this film is Devi Sharma and the producer is Sumit Manak. The trailer of the film has been released on 10 May 2022. Till now the trailer has got only 2000 views. Which in itself shows that the film is of small budget.

Now let's talk about the casting of the film. Sumit Manak is playing the main character in the film. Along with them you will see Gurchet painters. Gurchet Chitrakar is the face of the Punjabi film industry who is also an actor, writer, and director. Even before this, he has worked in many films. These include Punjab Bolta, Tor mittran di, Chak De Phatte, Heer Ranjha. Apart from this, Gurchet Chitrakar has made many comedy films. Like from family 420, family 421, family 422, family 423 to family 430. Apart from Gurchet Chitrakar, there are many other faces like Pragya Anand, Malkit Roni, Tarsem Pal and Sanju Solanki.

How much this film is liked by the audience, it will be known only on 20 May 2022. How did you like this information, do write to us. Stay with us for information about other films.