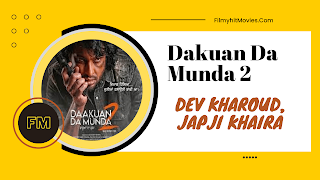 How are you dear friends, we hope you all are doing well. In today's article we will talk about the upcoming film Dakuan Da Munda 2. It is a Punjabi action film. This Punjabi movie is going to release on 27th May 2022. The story of this film is set on a Punjabi novel, whose name was mischievous element. The director of this lovely film is Mandeep Benipal. The producer of the film is Ravneet Kaur Chahal and Manish Sahni is with it. Talking about the trailer, the trailer has been released 2 weeks ago, which has been seen by more than 4 million people so far. The trailer of the film has been liked by 135000 people.

Now let's talk about the casting of the film. Dev Kharoud is playing the main character in the film. Dev Kharaud, a resident of Patiala, is a shining star of the Punjabi film industry. Earlier, one of his films was a very super hit, whose name was Rupinder Gandhi - The Gangster. This film was a super hit in 2015. Apart from this, his two films Kabaddi in Mohabbat and Sadda Haq did very well. Talking about the female actress, Japji Khaira's name is in it. 33-year-old Japji Khaira is a well-known artist of the Punjabi film industry. Let us tell you that Japji Khaira started his film industry in 2006, while Khaira has given many hits like Dharti, Singh Vs Kaur, Phir Mamla Gada Gada, Paaji in Problem, Ishq Brandi. Apart from this, the names of other actors in the film are Raj Singh Ginger and Nishan Bhullar. This film is going to be liked a lot by the audience.