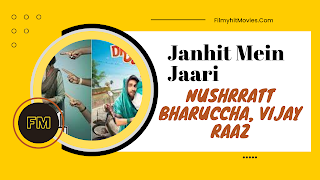 Friends, Janhit Mein Jaari is a comedy drama film. This comedy film is going to release on 10 June 2022. This Hindi language film will be released only in Hindi language. It is a family film. Vinod Bhanushali is the producer of this lovely film. The writer of this film is Raj Shandilya. Music has been given by Javed Ali and Raftaar in the film. In the story of the film, you will see the fights happening in a family. The trailer of the film has been released 3 weeks ago, which has been seen by more than 13 million people so far. This trailer has got a lot of love, it has been liked by 240000 people, the trailer is very funny and full of comedy.

Now let's talk about the casting of the film. Nushrat Bharucha is the main heroine in the film. Nushrat Bharucha, 33, hails from Mumbai, Maharashtra. Before this, he has worked in many hit films. We will share with you the names of some of these movies. like; Pyaar Ka Punchnama, Seven, Akashvani, The Mall, Pyaar Ka Punchnama 2, Meerutiya Gangsters, Waliba Raja, Sonu Ke Titu Ki Sweety and Dream Girl. The film Chhalaang, which came in 2020, was his super hit. With them you will be seen well-known comedian Vijay Raj. Vijay Raj, who hails from Delhi, is a very good comedian. He has given many hit films to the Bollywood film industry. Eg; Gully Boy, Dream Girl, Delhi Belly, Company, Raghu Romeo, Delhi Anubhav, Pataakha, Gulabo Sitabo. Don't know how many hit films are in his name. You must have heard the dialogue of his crow biryani, Vijay Raj is a very good comedian.