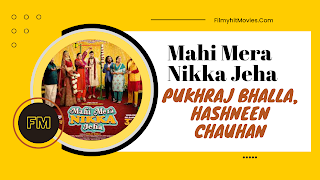 Mahi Mera Nikka Jeha, this punjabi movie is going to release on 3rd June 2022. This film will be an unmatched comedy drama and romantic film. The director of the film is Satender Singh Dev and the producer of the film is Rajeev Singla. Jagdev Sekhon has written the story of this lovely film. The trailer of the film has been released just 13 days ago, which has been seen by more than 5 million people so far. This trailer has been liked by 120000 people. The trailer of the film is a very good comedy. The story of this film is such that a short stature boy marries a tall skinny girl. You will enjoy watching all this in the film, how sweet and sweet fights take place between the family during that time.

Talking about the casting of this film, Pukhraj Bhalla is playing the main character. With him is the female actress Hasneen Chauhan. Together with Karanvir Deol, Anita Devgan and Jaswinder Bhalla. We are all Harman Pyare Jaswinder Bhalla, who was born in 1960 in Ludhiana. What is the point of Jaswinder Bhalla's comedy, because he is a tremendous comedian. Balla has given many hits which many names tell you like, Atmosphere is OK, Chak De Phatte, Jatt & Juliet, Sardar Ji, Saab Bahadar, Crazy Tabber, Carry On Jatta, Badhaaiyan Ji Badhaaiyan, Mar Gaye Oye Loko. Don't know there are many movies in which Jaswinder Bhalla has presented unmatched comedy. People have to give a lot of love to the film, we can guess this only by looking at the love of the trailer.