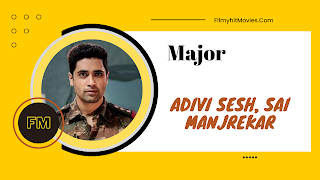 Friends, Major film is a Hindi language biography, thriller and action-packed film. The film will be released in Hindi as well as in Telugu and Malayalam. The story of this film is about the hero Major Sandeep in real life. The director of the beloved film is Shashi Kiran Tikka. These are the directors who have been making Telugu films since 2018. He made the first Telugu film Goodachari. Talking about the trailer of the film, the trailer has been released 12 days ago, which has seen more than 16 million people so far. The trailer has been liked by more than 500000 people so far. The trailer is made very well.

Now let's talk about the casting of the film. Aadivi Sesh is playing the main character in the film. Aadivi Sesh, who hails from Hyderabad, has given a lot of hits before this. Earlier he worked in Bahubali. Apart from this, his hit films were Gentleman, Kshanam, Karma and Panja. Sai Manjrekar is the female actor in the film. This 24-year-old girl has given many hits before this. Earlier this heroine has worked in films named Viruddha and Kaksparsh. Sobhita Dhulipada will be seen with Sai. This will be a good movie to watch for Indians having patriotism. How did you like this information, do write to us. Stay with us for information about other films.