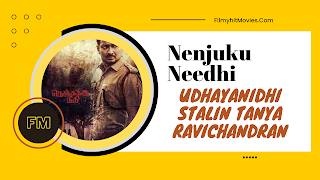 Friends, Nenjuku Needhi Tamil movie is releasing on 20th May 2022. This film is a thriller drama film movie. Arunraja Kamaraj is the director of the movie Nenjuku Needhi. Boney Kapoor is the producer of the film. Anubhav Senani has written the story of this film. Dipu Nainan Thomas has given music to this lovely film. The trailer of the film has been released just 4 days ago, which people have liked a lot. The trailer of the film has been seen by close to three million people so far.

Now let's talk about the casting of the film Nenjuku Needhi. Udhayanidhi Stalin will be seen in the main character in the film. This is an artist who has given very good superhit films to the Tamil film industry. These films include Oru Kal Oru Kannadi or Idhu Kathirvelan, along with Aari. Talking about the female actress, Tania Ravichandran will be seen in the female role in this. There are many other famous faces like Suresh Chakraborty, Ilavarasan, Mayilsamy. Overall, the film meets all the criteria. Right now how much it attracts the audience, it will be known only after its release.