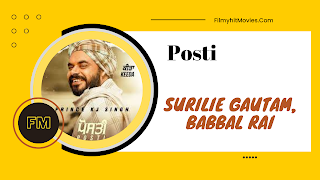 Friends, there is a lot of comedy films inside the Punjabi film industry. Continuing the same sequence, this film named Posti is coming, which means addict. This drama social film is going to release on 3 June 2022. The film will be released in Punjabi language only. The director of this film is Rana Ranbir. You must have known Rana Ranbir, he has struggled a lot with the current Punjab Chief Minister Bhagwant Mann. The story of the film is written by Rana Ranbir. The producer of the film is Gippy Grewal. Let us tell you that this film is releasing on the big screen after 2 years. The trailer of the film was released 2 years ago, which has been seen by more than one and a half million people so far. 35000 people liked the trailer. The trailer is great, the comedy is fun.

Now let's talk about the casting of the film. The first name that comes in this is that of Babbal Rai. 36-year-old Babbal Rai has been in the film industry for a long time. His Mr and Mrs 420 and Dildaariyan films were huge hits. He has been a playback singer B in the 2017 superhit Punjabi film Sargi. Along with Babbal Rai, you will see the female actress, Surili Gautam. Rest you know about the well-known faces of the Punjabi film industry. A film in which Rana Jung Bahadur was not there, that film would not have been a hit. Rana Jung Bahadur is an exceptional comedian. Apart from this, the names of other artists are Jas Prem Dhillon, Raghuveer Boli, Prince KJ Singh. The film audience will like it a lot, because comedy films are very much liked in the Punjabi film industry.