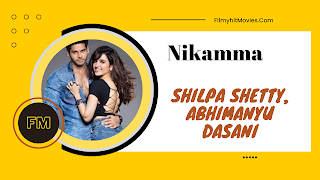 Nikamma is a Hindi-language Bollywood action film. This lovely movie is going to release on 17th June 2022, for which the booking has already been opened. The story of the film is about a boy named Abhimanyu, who lives in Lucknow. In this you will get to see many famous faces, such as; Shilpa Shetty and Shirley Setia. The director of this film is Shabbir Khan. Veeru Shri Ram has written the story of the film. Hamal Malik has given music to this film. Vipin Patwa has supported Hamal Malik. The trailer of the film was released two weeks ago, which has been seen by more than 16 million people so far. This trailer has been liked by more than one lakh people. The trailer is very funny and comedy.

Now let's talk about the casting of the film. Bollywood's famous actress Shilpa Shetty is playing the main character in the film. You will be seen with Abhimanyu Deshani. Shilpa Shetty was born on 8 June 1975. In the 90s, Shilpa made a lot of hit films. She entered films in 1991, when she was just 15 years old. After that in 1993, the film Baazigar made her a superhit. After that she did the film Aag in 1994 with Govinda and Sonali Bendre. In 2000, she did wonders in the film Dhadkan with Suniel Shetty. What an amazing film you made, Dhadkan. In the film Nikamma, you will see a new actress, her name is Shirley Setia. Shirley Setia is a Singer. With them you will be seen Sameer Soni. Overall, the film will be a lot of fun.