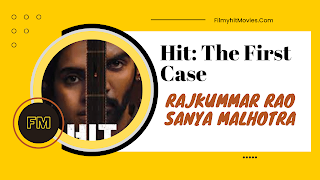 Hit: The First Case, Friends, this Hindi language film is going to release on 15th July 2022. You will see a lot of suspense in this movie. The story of the film is about a 32-year-old police officer. How he saves 1 18 year old girl, who goes missing in Jaipur. The director of the film is Shailesh Kolalu. The producer of the film is Bhushan Kumar, he is supported by Dil Raju. The music of the film is given by Syed Qadri. If we talk about the trailer of the film, then the trailer has been released 2 weeks ago from today, which has been seen by more than 24 million people so far. Let us tell you that more than three lakh people have liked the trailer.

Talking about the casting of the film, you will be seen in the main character in the film, Raho Rajkumar. 37-year-old Rajkumar Rao hails from Gurgaon, Haryana. He did his first film in 2010. The name of this film was Love Sex Aur Dhoka. Apart from this, he has given many hit films to Bollywood and film industry. Sania Malhotra will be seen in the film as a female actress. 26-year-old Delhi resident Sania Malhotra has worked in many films before this. He did his first film in 2016, which was named Dangal. In which she was playing the role of Babita Kumari. Apart from these, you will see many other well-known faces in this film. whose names are as follows; Dalip Tahil, Milind Gunaji, Shilpa Shukla, Sanjay Narvekar. Overall, the film is going to meet all these criteria.